Cine-Ween: THE POLITICS AND HORROR OF PERFORMANCE IN SUSPIRIA (2018)

Something is rotten in the state of Germany. The idea of a darkness encroaching in on the world from the fringes exists in two parallel lines in Luca Guadagnino’s labyrinthine Suspiria (2018), which takes the “coven hiding in a dance academy” premise of Argento’s original and runs with it in all sort of new and strange directions. This darkness beating at the heart of Guadagnino’s film is one that’s animated by the act and art of performance: the performance of dance, of witchcraft, of political ideology; examining where these ideas converge and diverge, like an elaborate piece of choreography. By existing both in the midst of a heated political moment, while also casting an eye back on dark chapters of world history, Suspiria interrogates the rise of fascism, and the impact of extreme ideologies.

But these political ideas don’t only exist in the political background of Suspiria. The power of the film comes from the ways in which it entwines politics with the practice of dance, and with the Mother Markos Dance Company. This takes on another layer through the revelation that the company is also a front for a coven of witches. Dr. Josef Klemperer (Tilda Swinton) even compares the dance company to the Reich; he argues that both organisations have “insignia” and “esoteric rituals.” This serves as a way to create a new language for those who have been initiated into the ideology. The rituals of choreography and dance serve as a way into this new language, a combination of performing dance, and the rituals of witchcraft performed by the coven; the act of dancing itself is even imbued with a certain power by the witches.

In one sequence, when Susie (Dakota Johnson) dances for Madame Blanc (Tilda Swinton), her movements have a violent impact on another student, mangling and killing her. This violence isn’t just a consequence of witchcraft, but also a sign of the parallels between fascism and contemporary dance. In her destructive dance, Susie follows the instructions of Madame Blanc. Blanc herself argues that in dance, one “creates space” for another, either in terms of the company, those who have performed the same role before you, or for the coven, space for another soul.

The idea that Susie’s body be used as the host for the soul of the aged Mother Markos (Tilda Swinton) is key to Suspiria, and, like so many other elements of the film, the coven centric plot-point becomes a way to explore themes of ideology and extremism. Here, totalitarianism is tantamount to the surrender of the self, literally giving up a body so that someone else can control it, and, in the case of Mother Markos, control the coven as well. The politics of the coven – the votes for a new leader, and the climactic destruction of Mother Markos and those who supported her by Mother Suspiriorum (Dakota Johnson). The blood-soaked climax of the film is political regime change in the guise of body horror, a literally violent upheaval and replacement of the old order with a new one. This parallels the atmosphere of political upheaval, and potentially violent change, that runs in the German Autumn background of the film.

The hijacking of Lufthansa Flight 181, and various other incidents of political insurgency and terror take place in the background of the film. Rather than having historical events overshadow or overwhelm the lives of the characters, Suspiria instead allows them to echo and reverberate throughout the main story. For a film so fascinated by movement, empty space, and the loss of self, the ways in which political danger – and the political history of Germany – creep in and out of the periphery of the film makes perfect sense; just as Susie needs to make space for the echoes of past performances of Volk, so too does the political background of Suspiria allow for the creation of a space that lets it exist in tandem with witchcraft, and the traumatic national memory of Nazism.

It’s impossible to ignore the role that Nazism plays in how Suspiria approaches questions of ideology and political extremism. Dr. Klemperer has personal experience with the horrors of the Nazi regime; his wife was in a concentration camp during the war. Her spirit appears to him, leading him to the dance company’s academy for the Sabbath that will end in the anointment of Mother Suspiriorum. In the film’s epilogue, Susie/Suspiriorum visits Dr. Klemperer, and informs him as to what really happened to his wife: that she died in the concentration camp she was taken to after being captured by the Nazis. While there’s a moment of humanity in this, the fact that Susie, in becoming Mother Suspiriorum, gains knowledge of what happened in concentration camps is a telling moment, not only in terms of the power that she has, but the parallels between the power that she now has over others – both in and out of her academy – and the power that comes from being at the top of totalitarian regimes.

It makes sense that the political parallels of Suspiria function like a dance, with an emphasis on how individuals interact not only with each other, but with the empty space that surrounds them; empty space that’s loaded with the power of the past, and the darkness of witchcraft. Performance of the loss of self as the member of an ensemble has the potential to lead to a literal loss of self, or loss of life, as the coven changes. There’s a horror in these performances, not just in the way that Susie’s dance mutilates a student, but in the dark magic that the performances of the Mother Markos company seems to invoke. These performances, and the environment in which they take place, have the potential to create something monstrous, something that echoes throughout history. 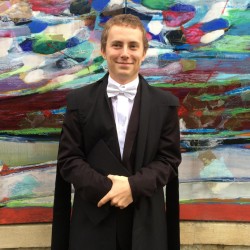 Sam is a writer of prose, poetry, and drama. His work has appeared in print and online with Underwood Press, the DASH Journal, and other places. His freelance work has been published by i-D, Little White Lies, Vague Visages, and elsewhere.

Liked it? Take a second to support us on Patreon!