It’s easy to get stuck in a rotation (or worse, a rut) where you listen to the same 10 bands, 20 records on repeat and can’t seem to find the right additions to your log of jams. With the democratization of the internet, finding music is (technically) easier than ever, but, with a million choices before you (and plenty of ways to legally stream new music) it can be a daunting task. In that light, we’ve asked our writers to share their favorite new (sometimes liberally using that word) tracks they can’t get enough of.  So without further ado, we bring you NEW MUSIC MONDAY.


When I originally suggested creating this column it was not JUST because I wanted to highlight the actually diverse tastes of our extended staff/family. That was a reason, but it wasn’t my main one. My main idea was this- I read these things obsessively. If your website has a list of new bands/releases I need to know about, and I see it? I click it. This band was on one of those. I wanted some newer hardcore releases, and I got this thick slice of crossover worship, and I love it. I am a bit of a crossover poseur, preferring newer acts to the classics, but I know I am not alone.

Impalers have been cranking away great tracks since their debut release in 2010. Taking cues from DISCHARGE and MOTORHEAD (without sounding like another tired Motorcharge band), as well as a heap of Scandi punk, they manage to take a genre far too often bland and reenergize it. Their latest is perhaps their best yet. 10 tracks in almost as many minutes, Cellar Dweller is a high contender for Album of the year. Chris’ vocals have never been so fierce

Everyone’s losing their minds over that new QUEENS OF THE STONE AGE, and I’m playing this for the dozenth time. Everything A GIANT DOG has done up to this point has been amazing, but this is the absolute pinnacle of their driving rock ‘n’ roll. That driving bassline and drum work makes this a dance party, even without the dopeness that is the squad and pyro in the video.

Like the bastard stepchild of TALLEST MAN ON EARTH, BOB DYLAN, and IGGY POP – TREVOR SENSOR’s new album is something of an exercise in, ‘Do I really dig this?’ By the time Track 6, the upbeat, whimsical, and piano-driven eponymous track, hits, he’s left little room for doubt that he’s one of the most inventive songwriters around right now. The standout track comes late in the album with “The Money Gets Bigger” where Sensor’s ever-shifting vocals wind into a collision of orchestra and chorus that seems more at home on an Arcade Fire album but somehow manages to tie up this joy of this record in a nice little bow. Each song here feels like it could be off an entirely different album and yet they all work together. It’s rare an album comes along that is, from beginning to end, impressive on so many different levels.

Billy Ray Brewton has been known to tweet at @BillyRayBrewton

I think this might be the closest American hip-hop has ever gotten to UK grime. It’s dirty as hell, but still rocks that old-school Brooklyn style that pulls heavily from ’70s soul records. LEIKELI47 has a flow that reminds me a lot of LADY SOVEREIGN, but more forthright and less mischievous. It’s bomb as fuck, and the fact that it’s basically just about being ready to not fuck with any bullshit with a blunt loaded like a forklift, I think I’m ready to join the club.

Nick Spacek is a ‘rock star journalist’ at @nuthousepunks

This came out in late 2016 so fuck it, it’s still current.  First off, the logo looks like something your 10th grade hesher friend drew on your notebook while you were in the bathroom.  Raw punk/metal that gallops along strong, but the last song is the real keeper.  Just pounding, simple, hard and relentless.  Sounds like demo era Sacrilege, but more blunt if that’s possible.

Much like my favorite Romero film Martin, this band reps Braddock hard. This release rips, has just enough stomp to feel tough, but the sort of crazy riff action that our current crop of norman core-man hardcore bands wishes they could pull off. This is hardcore punk, fast and heavy and angry. I love the vocals on this thing, I love the guitar tone, I love that it makes me wanna act irrational in a group of strangers.

This stuff gives me flashbacks to the early 2000’s, but I can’t put my finger on exactly why. Hardcore punk played at a pace and style that would have fit in well on the Partners in Crime label.  Lyrics are a stark rebuke against small town minds.  “Wearing Thin” steals the show here; the beginning is straight up ignorant Nautica gear 1998 HC; then there’s that magic word “GO!!” and everything explodes at full speed.

SHEER MAG’s debut full-length, Need To Feel Your Love, is out this week, and after three amazing singles, it’s looking to be the band’s breakthrough. “Suffer Me” is a ridiculously laid-back cut from a band better known for power-pop gems, but the catchiness is still undeniably there. The way they weird out and tweak a different ’70s subgenre — in this case, southern rock — is goddamn brilliant. It grooves in a way the band hasn’t in the past, and I love this new side of SHEER MAG.

It’s kind of a cheat to put a live record here huh? Well, it doesn’t really matter because CARPENTER BRUT have done what most bands never are able to accomplish: release a live record which is just as good if not better than their studio output (well Kiss had that down pretty well). While comprised mostly of tracks from their Trilogy record, the band spins them fresh by slightly altering their structure to compliment a live setting. When I saw them play a few months ago, I dreamed they’d release a record of the performance. Well, wish granted.

I’ve been in love with Bombadil for about a decade now. Some might categorize them as ‘hipster rock’ but that would be far too simplistic a categorization. For starters: I hate hipster rock. This band is as inventive as any around. They can do rock and country and folk and electronic and soul and doo-wap and, yes, even viking rock. Their latest album, Fences, finds them in top form, taking an even more simplistic, stripped down approach to songs that just get stuck in your head, songs like “Binoculars” and “Is This Danger”, the latter of which turns into a mournful, almost gospel sort of elegy. It’s three guys, a host of unusual instruments, and a dedication to creating tunes that defy both logic and placement. Sure, you could call them ‘hipster rock’, and maybe you wouldn’t be entirely off-base. But, if Bombadil really are hipster rock, we should all be fortune enough to be hipsters and have a band like this churning out music for us.

This is a little more melodic than past efforts from LONG KNIFE, but still really great. There is a bit more here to grab unto, and it is slightly less brutal for that, but the energy is there. This record is, and I hope this does not offend the band, a lot of fun. Not just a visceral release of anger or frustration, but a real good time.

Knowso – Look at the Chart

Yet another band comprised of members of CRUELSTER and PERVERTS AGAIN (for those counting, this must be Jo’s 17th band), KNOWSO play an expected brand of weirdo punk that is infectiously catchy and upbeat. With dual vocals overlaying simplistic riffs (that rely more on single notes than chords), this is a promising debut release from the much overlooked city of Cleveland.

Fast, frantic hardcore punk that seems on the verge of falling into disarray.  At the last moment, everything comes together into stomping, memorable riffs and choruses. Sounds like these guys were raised on a steady diet of boogie rock and Dran-o.  First side songs are Outtakes that are a cut above what most bands put on vinyl.  Side two is a practice tape that adds to the twisted vibe.

Alec Benjamin – “I Built A Friend”

Such a simple song. Such a simple arrangement. Yet, I can think of fewer tracks that have stuck with me as long as ALEC BENJAMIN’s beautiful ode to growing up, “I Built A Friend”. All we have here is piano accompanied by Benjamin’s high-pitched vocals that seem like a combination of THE ROCKET SUMMER and some sort of boy band member who didn’t fit in because he actually knew how to create gorgeous music. BENJAMIN has been dropping lots of singles and demos but has yet to deliver a fully fleshed out album. If half of that album (whenever it comes) is as nostalgic and lonesome as “I Built A Friend”, I would expect him to blow up any time now. Until that day comes, we get these little tastes of what the kid has to offer, and they increasingly become more and more appetizing. He looks and sounds like he’s in high school, but his songs are deceptively emotional and he’s already working at an insanely high level. 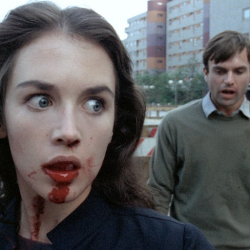 Latest posts by Joe Yanick (see all)
Liked it? Take a second to support us on Patreon!

This site uses Akismet to reduce spam. Learn how your comment data is processed.