Trey and James return from their brief excursion last episode to bring you a whole new trio of terror with three torrid tales straight from the legendary Marvel Bullpen of July 1973:

First up, we meet everyone’s favorite daywalker. That’s right, it’s BLADE, THE VAMPIRE HUNTER in TOMB OF DRACULA #10, “His Name is… BLADE!,”

Next we have a savage tale of sutures and snow in MONSTER OF FRANKENSTEIN #4 with “Death of the Monster!,”

Finally, we return to the circus with Jack Russell and company in WEREWOLF BY NIGHT #7 and the “Ritual of Blood!,”

So strap on your favorite bandolier of wooden knives and click play on your podcatcher of choice, Tomb-Believers, as you listen to the greatest audio achievement of the last 14 days!

…Well, would you believe 14 hours? …How about minutes? 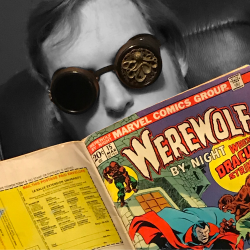 James Hickson
Before being trapped in the Tomb, James Hickson was a father and social studies teacher in Columbia, SC. His relationship with Marvel Comics began when an aunt gave him a copy of "Origins of Marvel Comics" at a young age, which has spiraled into him being kidnapped and forced to do a podcast against his will, so maybe not the best gift, huh Aunt Nell!?

Latest posts by James Hickson (see all)
Liked it? Take a second to support us on Patreon!